Another Saturday, a very warm one, has come and gone.  In the early morning hours, before the first sip of coffee was even in a cup, I took my RX10IV and headed for Dunkin Donuts.  The one that’s two miles away from Huntley Meadows.  The sun had just broken through the horizon, and I needed the sun to go up just a little higher to clear the tree line at Huntley.  And I needed a little jolt to wake me up so to speak.

It was near 80F at six in the morning.  The day had barely started and the humidity was already beginning to make things a little uncomfortable.  Oh well, I was already at the parking lot, so I might as well take a walk through the woods and then into the wetlands.  As I crossed into the boardwalk, the moon was still visible in the sky.

And the white flowers were there, just like they were the week before.  The air was heavy with heat and humidity.  As I walked further towards the wetlands, the flowers, with dew clinging to the leaves and petals, were backlit by the rising sun.  It was quite a thing to behold.  Hundreds, maybe even a thousand or so flowers, glistening in the early morning light.

Sometimes, you need to stop and admire the things around you.  And enjoy the unexpected.  It warm.  It was humid.  The sun was up.  I was going to just quickly walk through and look for birds.  And yet.  In the heat of the rising sun, nature reminded me yet again to slow down and enjoy life.  Take the whole thing in.  The story is not just what we want it to be.  It is an entirety waiting for us, to discover, to find new things, to explore.  It is not always what we envision, but if we keep our eyes open, it can and is often better than what we imagine.

The red algae was blooming in the main wetland area.  Water was evaporating, as it always does.  The water level drops down as summer progresses.  With little rain to naturally replenish the wetland, the water was shallower, murkier.  I walked towards the observation tower, where I spied the egrets and herons wading in the shallow water.

I was amazed.  Huntley was alive this particular Saturday morning.  Two kingfishers were flying about.  Just a little bit to far to take pictures of, but you knew they were there.  A deer was foraging by some bushes.  The herons were in the water.  They were in the air.

The herons were fishing.  And I thought that maybe, just maybe, this heron’s appetite was a little bit too much. 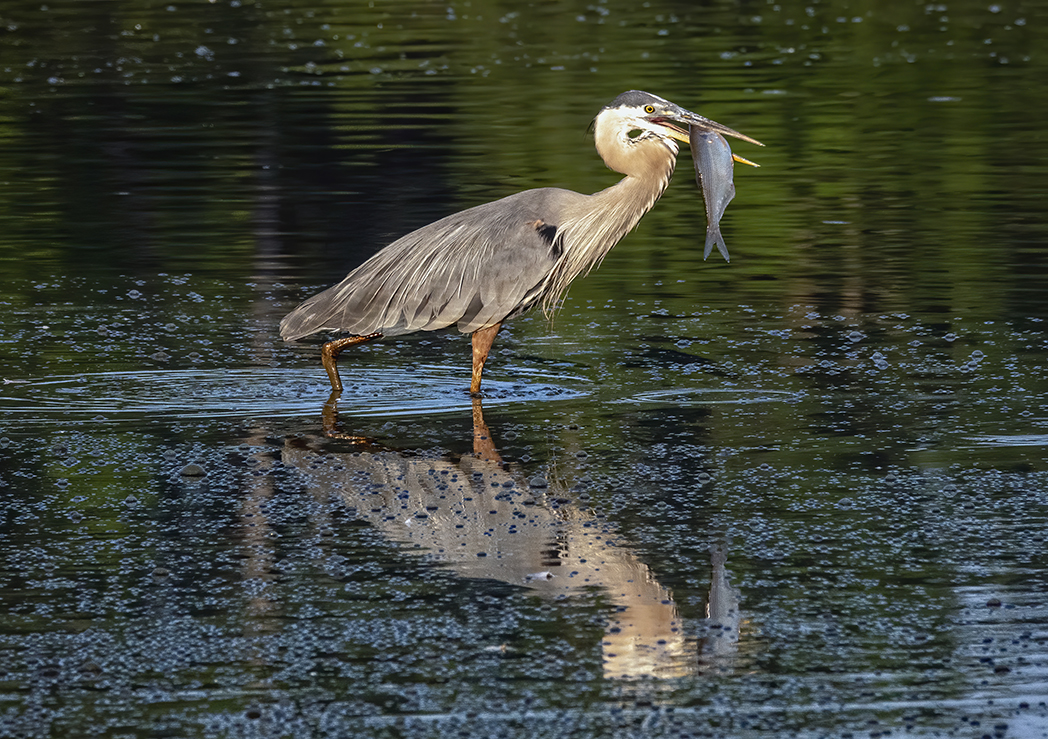 And then an osprey flew by.  And caught a fish.  Not quite the magnificent catch I saw earlier.

There were herons aplenty.  Herons grooming themselves in the “mirror.”

Herons with unexpected visitors, like this juvenile white ibis.

And suddenly, a flock of egrets flew by.  Land, I said to myself.  And land they did.  By the red algae bloom of the Huntley wetlands.

It was hot.  It was humid.  That was to be expected.  The egrets in the wetland.  One or two, maybe.  A flock stopping by to rest, perhaps to cool down just a bit.  That was most unusual.  And on this summer day in July, it was most welcome.

It did it its way.